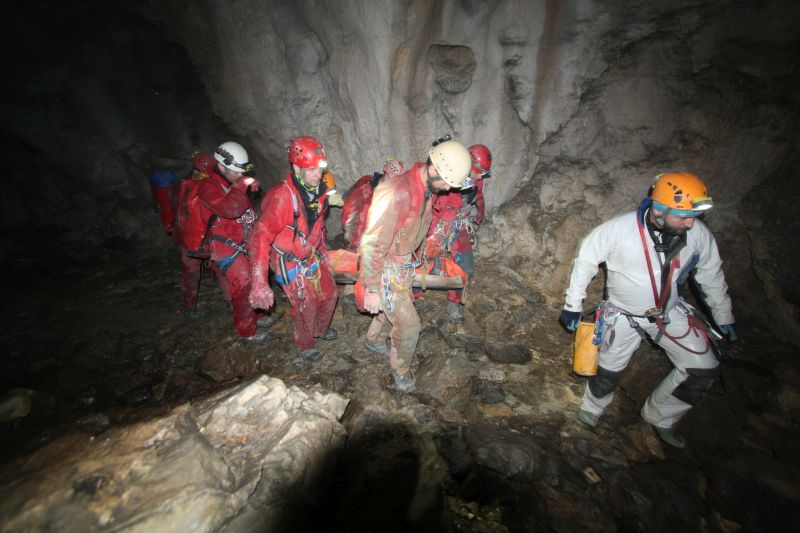 Between 28.10.2015 and 30.10.2015 was hold a cave-rescuer meeting  in Zakopane, Poland. Beside the organiser local rescue organisation (Tatrzańskie Ochotnicze Pogotowie Ratunkowe - TOPR) took part the Czech, the Slovakian and the Hungarian cave rescuers (the “V4 countries”), altogether 25 people.

Our accomodation was in the rescue basis of TOPR. That is a 4 staged building in Zakopane, which is also an operative centre, an equipment store and a preparation basis at the same time. In the underground store there is a great amount of rescue equipment, which is completely changed at least in every two years.

In the base level is the operative centre, here is a mountainy rescuer group waiting for the alarm round-the clock. At a few hundred meter distance from here there is a helicopter base, where two helicopters are ready to be used for rescue. In the Tatra-hills there are 1500-2000 accidents yearly, most of them are ski-accidents, and avalanches.

Among the mountainy rescuers there is also a cave-rescue group. It is very difficult to became a rescuer in this organisation, mountainy rescue is a popular profession in Poland. On Wendesday afternoon some lectures were held, the Polish rescuers demonstrated us their technic, style and equipment. Our lecturer shoed the history and the structure of the Hungarian Cave Rescue Organisation.

On Thursday morning after a brief adjustment we went to the Czarna-cave, which is 20 minutes riding by cross-country-car, after that 30 minutes steep hill-climbing from the base. The cave has two entrances, we used the bigger one, which is situated in the bottom of the cliff and at the top edge of the downhill forest. In the cave there are 10-20 m deep pitches and not too difficult horizontal passages. This cave is often used for cave rescue educations.

The planned action was the following: The cave was divided into three parts, and in each part one of the guest rescue organisation was the leader of the transport.

The Hungarian part was the first one, started with a chasm, in which the transport was done by rope-technics diagonally, through about 15 m horizontal distance and 20 m vertical distance. We used counter-weight hauling system combined with a breaking rope behind and with a rescuer following and controlling the stretcher. After that came a short and rather simple horizontal transport without ropes.

The next part was organised by the Slovakian group. It was a horizontal movement above a chasm. They used a counter-weight hauling system combined with a lowering rope. After that an about 100 m long horizontal transport with less pitches up and down. In each pitches a lifeline was used for the stretcher.

The last part was directed by the Czech group. It was a simple Hauling to the entrance and dropping down to the nearest horizontal place. In the hauling part on some places a rescuer was needed to control the stretcher. The Czech group used a simple but effective method, so the stretcher was soon in the surface. The total action in the cave was 6 hours. After that the cave was derigged and we went back to the basis and spent the time with dinner and friendly conversation.
On Friday morning the local leaders gave an evaluation, in which they told that they were satisfied with the performance of each groups. After that we had an opportunity to see the helicopter base, and later we went to a short tour into the Chocholowska cave.